I have never met anyone like Rita didi before. Well, in these three months I definitely can't vouch that I know a lot about her but whatever I know about her is enough for me to be amazed by her professionalism, her poise and her love for cooking. When I was new she hand-held me and taught me how to do accounts. I used to make so many mistakes; she would patiently tolerate me and maybe she wondered in what hands the café has been given to.

Whatever work I talked about, she did it instantaneously without any procrastination. Tried new recipes, showed all the interest in cake decorations. One day we had to bake a cake for one of our staff member’s son’s birthday and I hesitated using frosting because then it would make it more expensive and it was being sold for a subsidized rate. She chose not to listen to me and make a frosting to decorate it her own way. I felt so small in front of her and in front of the way NIRMAN operates. All that had to be done was to whip up a little bit of butter with a little bit of sugar with a lot of love.

I could see that love in her for her colleague and his child. Didn’t cost us too much anyway. She takes initiatives, tells me what has to be done how. I rely on her. I am her baby. I cant do much without her neither can I do much without the other staff members. 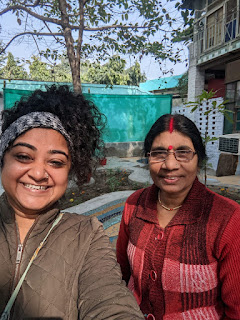