There and Back Again: A Bristol Fellow Tale

( Evan Warnock visited NIRMAN in the year 2015, as part of his Bristol Fellowship trip. Warnon's project was called, "Space matters:How the Spatial and Architectural Design of Schools affects students." This project  had brought him to Vidyashram- The Southpoint School.
The below is an excerpt from his blog. Please read the full blog at: )


Way back in April, I decided to make a trip to Varanasi on the Ganges. Part of my trip was centered around seeing a school there that I had heard lots about from a college professor at Hamilton, Chaise LaDousa. The school is called Southpoint Vidyashram, and it is run through Nirman, an NGO started by an anthropologist named Nita Kumar. The school has been running since 1990, and it now serves students from kindergarten through 10th grade. 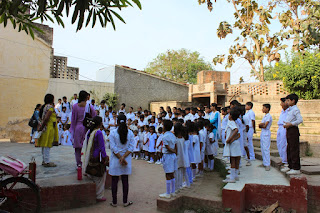 Announcemnts before schools around 8 am

As Nita Kumar discusses in her book, "the Politics of Gender, Community, and Modernity", Nirman was founded with the goal of working closely with the community to preserve their local culture while educating children with non-traditional methods of instruction. Rather than continuing the practice of rote memorisation like in most government schools, Kumar explains that she hoped Nirman's project heavy curriculum could teach students self reliance and social responsibility. Nirman also began with a focus towards women's empowerment and issues surrounding local artisans in Varanasi and the education of their children. Nita Kumar refers to her vision for a school as the "post-colonial" school, denoting a desire for the students to find and celebrate their own culture and identities rather that embracing western ideals, customs, and knowledge. I observed that Nirman strives for community ownership instead of a take over and reform strategy, which some NGOs risk employing if they do not fully understand the communities in which they work. Kumar writes, "We could strive for an interaction where we are not interacting with them, but are all in a mess together and can only resolve it together." 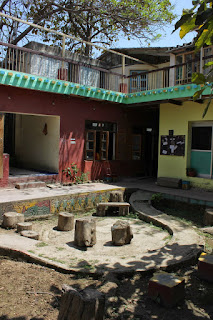 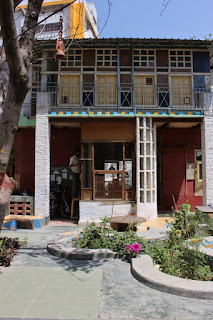 There is a cafe as well, where many people come for chai from the local community and Benaras Hindu University down the road from the school

When I walked in Nirman, I was most stuck by how vibrant and playful the school felt. Unlike other government schools that I've visited, I quickly came to understand that Nirman was designed for children's enjoyment and to enhance their school experience. Bright mosaics were built into the ground and walls. Trees were left on site to provide shade for kids. Classrooms on the second level looked more like treehouses than prison-like classrooms. Little benches were positioned in outside areas. Within classrooms, small students enjoyed desks and chairs that were appropriately designed for their body size and shelving at the correct height for their water bottles and lunch boxes. 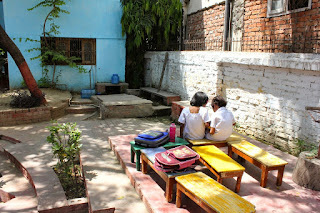 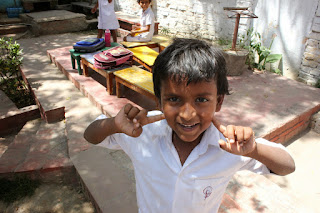 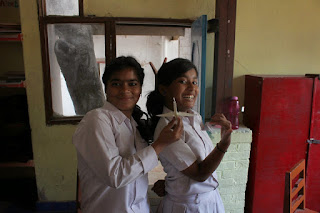 I taught a class of 9th graders how to make origami.

I strongly believe that the pleasing aesthetic of the whole school had a positive influence on children's perception of that space and school as a place more generally. It was a clean, orderly safe haven from the chaos of urban Varanasi. It felt more like a big house than a school. In short, without expensive computer labs or floor to ceiling glass, the architecture of Nirman subtly conveyed a child-centered and child friendly atmosphere.

Posted by harshita wadhya at 11:28 AM